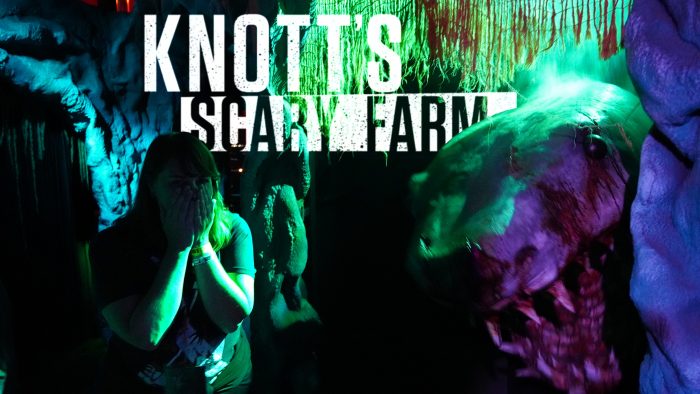 In the latest episode of Ordinary Adventures, Peter & Kitra experience Knott’s Scary Farm 2019 at Knott’s Berry Farm on opening night, exploring all the new mazes and old scare zones. Hit the jump to watch the vlog.

First up is a NEW maze, Origins: The Curse of Calico. “Pierce the veil of time and discover the secret of the evil fog that hangs over Knott’s Scary Farm in Origins: The Curse of Calico. Unearth the sinister paranormal activity that plagues the town as Sarah Marshall is put on trial for her suspected crimes of witchcraft. All will be unveiled when the Green Witch rises up and curses the townsfolk, transforming all who have accused her into a wicked horde of malicious creatures with an eternal quench for the living.”

Next, one of our favorite Knott’s Scary Farm mazes of all time, Special Ops: Infected. “Armed with cutting edge laser guns, brave guests will face off against hordes of zombies in the groundbreaking Special Ops: Infected interactive maze. Small units of guests will battle the zombie apocalypse through blood-soaked city streets and an underground sewer system crawling with nearly one hundred ravenous zombies. The high tech innovative experience thrusts guests into the middle of a live-action video game complete with live actors, real-time scoring system, kill streak rewards system and interactive targets, including a juggernaut boss zombie. This attraction is one of the largest mazes ever created in Knott’s Scary Farm history so form your squad and put your zombie apocalypse survival skills to the test in this action-packed, one-of-a-kind experience.”

Then another new maze, Wax Works, Kitra’s favorite of the night. “Mysterious lights and strange noises have begun to emanate from the eerie abandoned wax museum. The once prominent plastic surgeon, Dr. Augustus Scratch, has been seen tinkering at night and is now ready to show off his beautiful yet terrifying life-like masterpieces of hot molten wax and bloody flesh. It’s rumored that blood-curdling screams can be heard echoing through the halls of Wax Works as victims are horrifyingly submerged into a scorching hot cauldron of bubbling wax. Take a closer look at his gruesome works of art and try to escape his deadly grip or become the newest masterpiece to add to his collection.”

Right after that we did our favorite maze of 2018, The Depths. “A heavy fog drapes over an abandoned port village where ancient creatures lurk inside the pitch-black underground caves hidden below the seaside shores. The Nightwatch Mining Crew has mysteriously disappeared and village rumors point to the eerie tunnels the town sits upon. Myths of the terrifying horrors that lurk within the cave have often been whispered but never confirmed. Did the crew meet their demise at the hand of vicious creatures that live within the cave? Journey into the ominous caverns and follow the crew’s path into The Depths, discover if the superstition revolving around the cave is true or not. But be warned! All who have entered have never resurfaced.”

Dark Entities teleports us “beyond earth and into a realm where the darkness is absolute. In the depths of space, a lone station faces terror beyond all imagination. An extraterrestrial mutation has invaded the station, and it’s on the prowl for new hosts. The unearthly inhabitants’ force increases as it feeds on its unwilling victims. Escape the dark entities before its deathly force eliminates all living form aboard the station. There’s nowhere to escape when time is running out!”

Paranormal Inc. was next on the list and this one never disappoints. “The Haunting of Hayden Hill: Paranormal Inc. maze once again reopens its doors to those brave enough to uncover an eerie and supernatural adventure. Guests investigate a haunted hospital where the patients were tortured for decades by deranged doctors and nurses. Demonic spirits of the murdered victims have been detected throughout the mysterious halls, while evil medical staff prowl for new patients to torture.”

Dark Ride is another favorite from previous years. “Journey through an abandoned carnival ride where cruel carnie folk still linger in the shadows in Dark Ride: Castle of Chaos. The carnival has become a refuge for freaks and carnies. Now those shunned performers have created a dark world of terror which they plan to unleash on those who enter. Dark Ride will lead brave visitors through a treacherous path and into the bowels of a long-neglected attraction, as sinister shadows and horrifying scenes cast the gloom over the once pleasant ride. It’s everyone’s worst nightmare, being helplessly trapped inside an abandoned carnival ride without a way out.”

We are huge fans of Knott’s Scary Farm and with ticket prices starting at only $45 who can blame us?!

How ‘The Vigil’ Director Keith Thomas Made a Jewish Genre Film

‘The Golden Glove’ Review: One of the Most Disturbing Serial Killer Movies In Decades [Fantastic Fest 2019]